Everybody knows somebody who has had an amusing misadventure with a contractor, homebuilder, or even a DIY home improvement project gone horribly wrong!

Is it you ??? Share your story to be entered into our contest, and win a gift certificate from one of our industry sponsors.

Winners will be announced in our next newsletter and featured in this column. 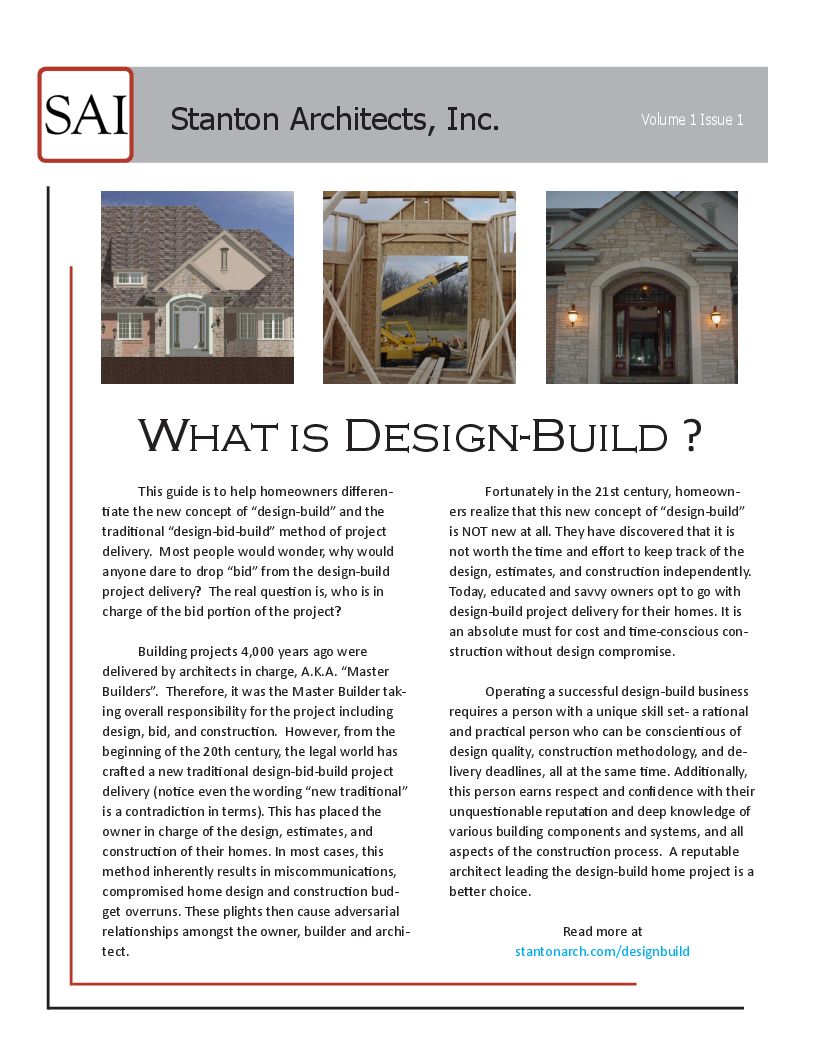 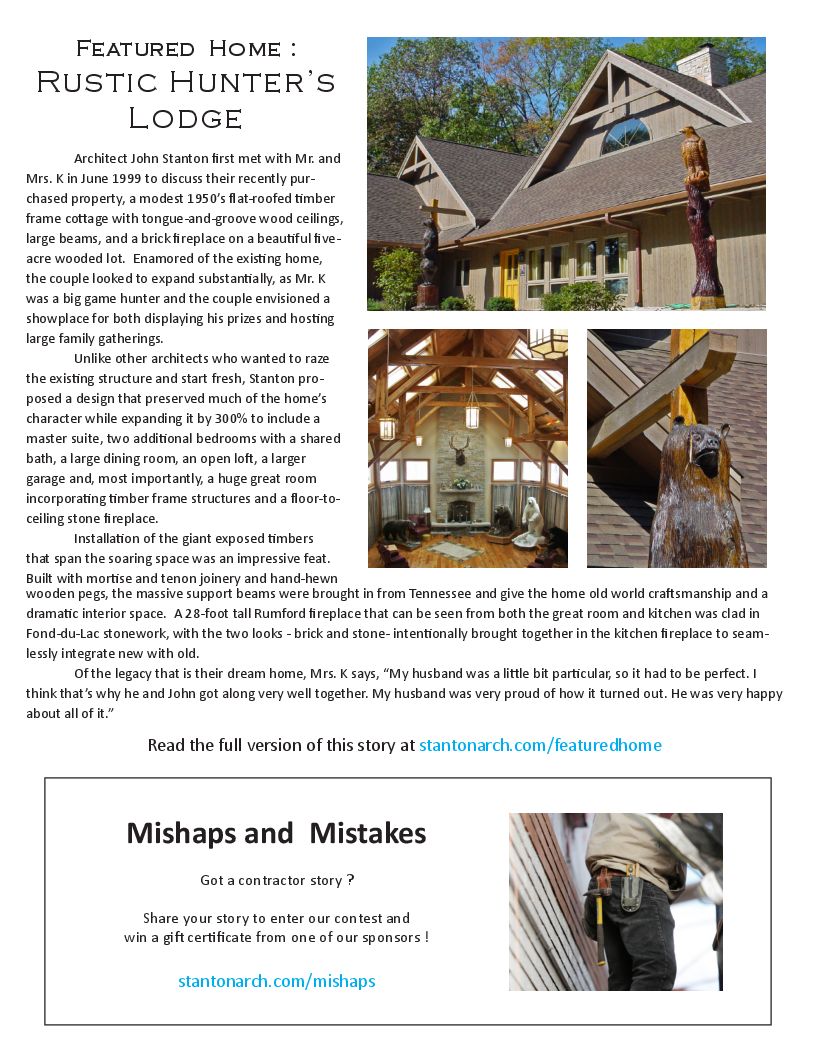 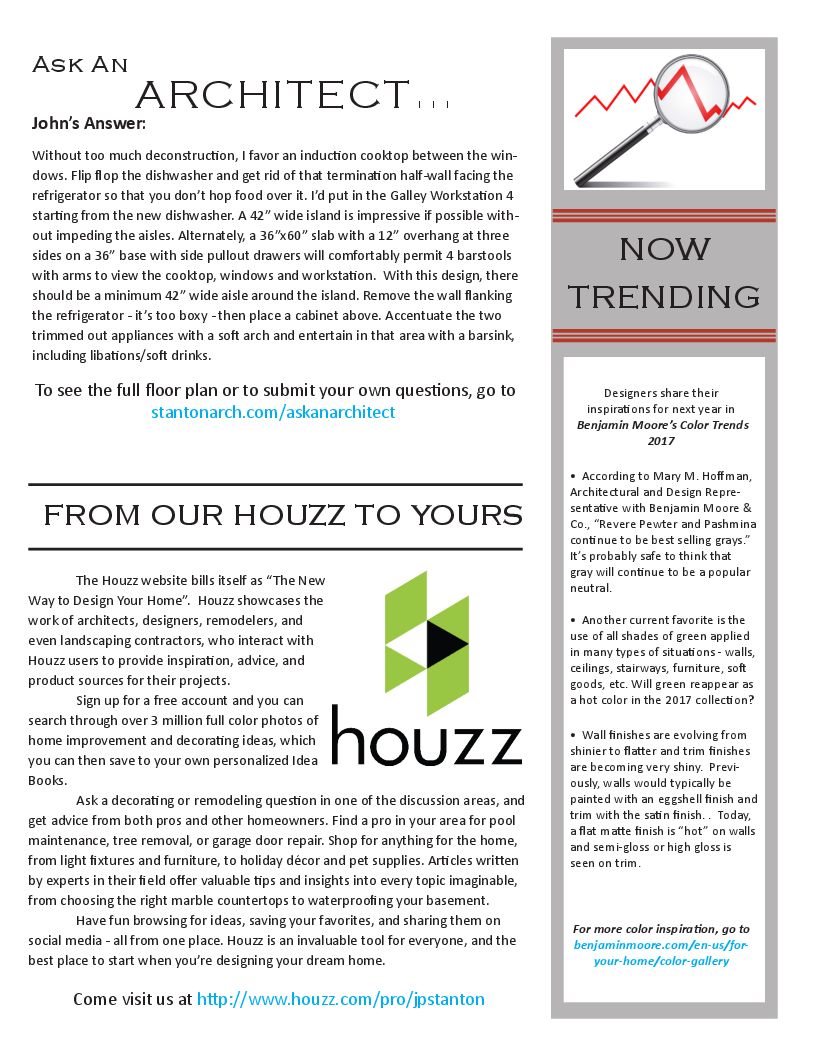 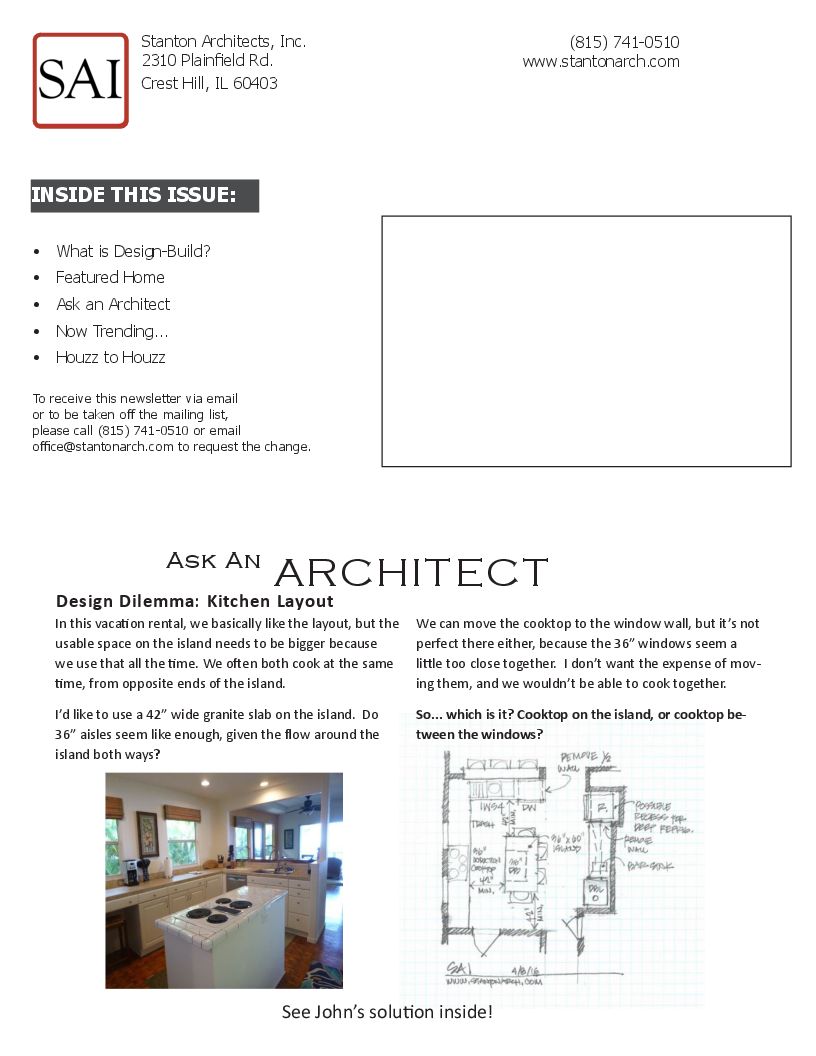 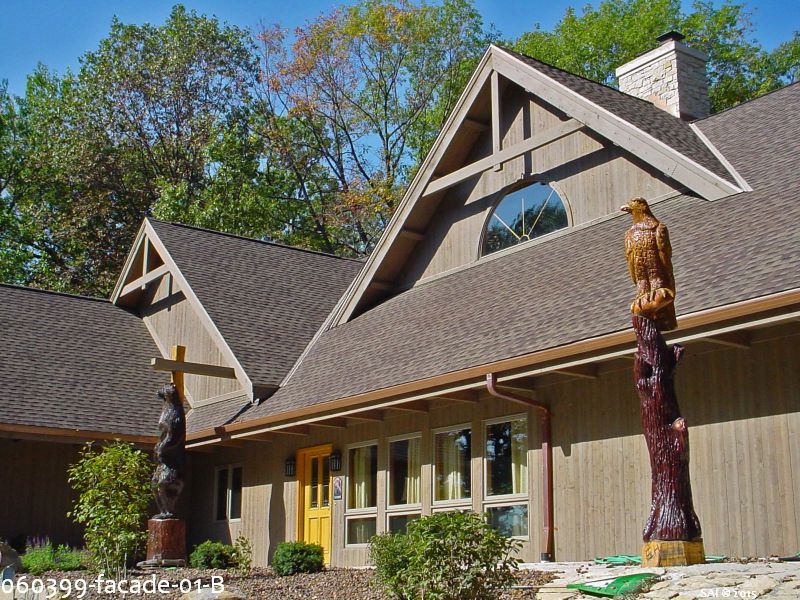 On a rainy day in June 1999, architect John Stanton had his first meeting with Mr. and Mrs. K at their recently purchased property in Rockdale, Illinois. Hidden in the center of an industrial area in this tiny blue-collar town, the modest 1950’s timber-frame home sat on a beautiful 5-acre wooded lot, just south of Mr. K’s successful manufacturing business. Serendipity had played its part, when one of their employees stumbled across the property for sale and alerted them to its availability.

The couple was enamored of the existing home on the property, a charming flat-roofed cottage with tongue-and-groove wood ceilings, large beams, and a brick fireplace. It had only one bedroom, however, and Mr. and Mrs. K were looking to expand substantially. Mr. K happened to be a record-holding big game hunter, and had a vision of a custom home that would become a showplace for entertaining and a veritable museum of Northwest Orient hunting and fishing. Mrs. K, on the other hand, wished for nothing more than a big dining room, a place to hold family gatherings for her three sons and eight grandchildren. With John’s help, they got both, and then some.

When Mr. K set about interviewing architects, each one wanted to raze the existing structure and start fresh on the site. John came recommended by a mutual friend, and – unfazed by Mr. K’s reputation for dismissing apparent dupes, conceits, and liars regardless of the circumstances – pragmatically agreed to assess the property and do his best to accommodate the couple’s wishes. Upon further review, John discovered what others had not, that tearing down the existing structure would have caused all kinds of issues with the current zoning laws. John’s proposed design preserved much of the character, while expanding the home by 300% to include an updated master suite, two additional bedrooms with a shared bath, a large dining room off the kitchen, an open loft, an expanded 2 ½ car garage, and most importantly, a huge great room, incorporating timber frame structures and a floor-to-ceiling stone fireplace, that would serve as both a “Hunter’s Room” for Mr. K’s prizes, and as an entertaining and gathering place for family and friends. 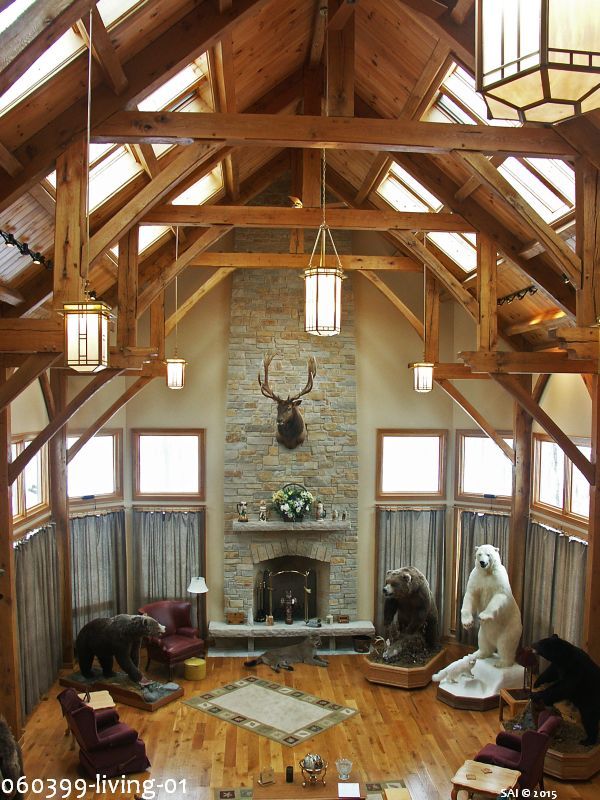 In regard to Mr. K’s reputation for knowing exactly what he wanted, we asked Mrs. K what led to this one architect finally winning him over. Was it a process, or was he just impressed with John from the beginning? “I would say he was impressed, because I heard of no one else. That’s the only name that came to me. My husband was a little bit ‘particular’, so it had to be perfect, and I think that’s why he and John got along very well together, because they are of the same mold. ‘Do it correctly, or don’t do it.’ Once I realized what Mr. K had in mind, I knew it wasn’t going to be easy.”

As anyone who has built a house before knows, challenges are inevitable, and this unique and expansive project was no exception. John was especially respectful of the original design and character of the existing house. He incorporated the original brick fireplace by underpinning it with new footings and extending it into the new partial basement, where concrete piers were also added to support the timber truss system to be added above. John recalls, “Even though the wood structure was engineered and fabricated by the company, we had to make sure the foundation could support it, and the whole back wall was underpinned in order to create the basement”. French doors alongside the fireplace now open through what used to be an exterior wall, into the new great room. A new mechanical room housing an energy-efficient HVAC system utilizes the backside of the fireplace as one of its walls, and a custom wood-clad switch-back staircase extends from the basement to the new 420-square foot loft.

Another obstacle was the 28-ft tall Rumford fireplace in the great room. One contractor, unwilling to accommodate the owner’s wishes, was dismissed, and another finally completed the Fon-Du-Lac stonework on the structure. About the differing materials on the two fireplaces, Mrs. K remembers, “Some of the people that gave us pricing on doing the fireplace in here wanted to cover the fireplace in there, and make it all match, and that was one of the things that we did NOT want to do. So that’s why we brought the two together in the kitchen, so you have both the stone and the brick in the kitchen.” This intentional mix of materials so seamlessly integrates old with new in home, that most visitors don’t realize they are seeing two structures in one.

Of course, the most impressive feat is the installation of the giant exposed timbers that span the soaring space of the great room. Built with mortise-and-tenon joinery and hand-hewn wooden pegs, the massive support beams were brought in from Tennessee by Hearthstone Homes, and give the entire home a feel of old-world craftsmanship that is rarely seen in today’s construction methods. The dramatic interior space boasts 6-foot tall windows on three sides, with views of the surrounding acreage. John added 32 skylights for additional daylighting, which balance the Craftsman-style stained glass pendants illuminating the space, and rain-sensor technology give the added benefit of managing ventilation. 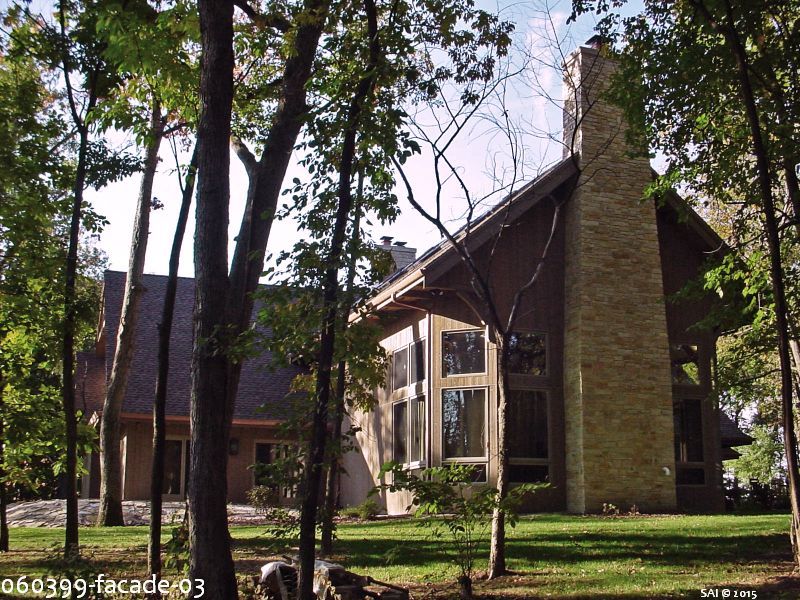 Another engineering marvel within the great room is the curved stairway to the loft, which is clad in a gorgeous rustic character oak. The landing boasts the best views in the house, and nearly every first-time visitor to the home requests permission to take photos from that particular vantage point. Mrs. K compliments the tradesmen who worked on the stairs as being very professional and easy to work with, and then adds, “As far as the landing goes, some of them said, ‘I don’t know about that one’, so Mr. K did that. He and John came up with that, and Mr. K did the landings himself”.

Drawing on his own past experiences with building or remodeling various homes and rental properties, homeowner Mr. K had mastered certain ways of dealing with difficulties, and even experienced architect John admits that he learned some things from Mr. K. Together, they resolved whatever predicaments arose along the way. In working with John, Mrs. K recalls him as being “Always here. I never had to wait for him, or look for him, or not get a call back. He was there”.

John’s attention to detail even extended outside, to the underside of the eaves, where the attached cedar boards were spaced out to mimic the original siding. The new wraparound deck is also entirely cedar, and maximizes views of the park-like setting from every angle.

And of the legacy that is their dream home? “My husband was very proud of how it turned out. He was very happy about all of it.”

“He never did anything small.”