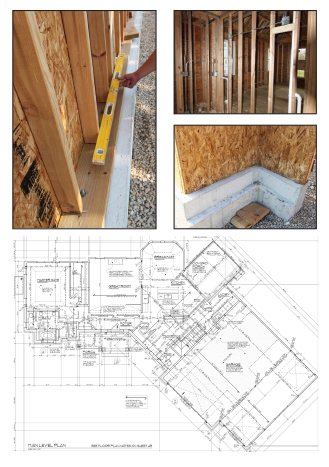 There are good reasons to hire an experienced architect. Contracting with an architect to oversee the building process of a home should be an important consideration for all prospective homeowners. Experience and skill are not a given with tradespeople and builders. A good architect is trained and skilled to properly design and build a home.

Take, for example, a client who contracted with John to build their dream home on the family’s farm. Their current home was a modest ranch with a nicely finished walkout basement near a retention pond with beautiful views, but it experienced several basement floods. This new dream home would have custom millwork, granite tops/tiles, high-end plumbing, custom flooring including bluestone pavers, and a finished attic/bonus room/basement. Additionally, a six-car garage was planned to house the client’s racecar and motorcycles.

John was commissioned to draw up the plans and oversee the building. A local builder, who came highly recommended, was hired but didn’t supervise the work of his sub-contractors or pay them. Many situations resulted in John firing the builder and taking over the job. Of the many problems John discovered, framing was a serious one. The second floor was starting to be framed when John saw that the first floor hadn’t been properly supported. When brought to the builder’s attention, John had to tell him the problem! The builder didn’t know the framing was done incorrectly because he didn’t know how to properly frame the building. John insisted it be taken down before a catastrophic event occurred.

Timing is everything. Another serious issue arose from the time of year regarding climate and taxes. The project began in October. The home, with an extra-large garage, was to be built on two lots. The problem was an easement between the two lots that took the city two months to vacate. By then, it was December and the ground was frozen so no foundation could be poured. It would be a few more months before construction could start. In the meantime, the IRS wasn’t concerned about a story. There was a large income generated in the year the contract was signed but no expenses to offset the income. That meant a much larger tax rate and less money to spend on building the home. Uh oh.

In the end, the project cost the homeowner 70% more than the budgeted price, due mostly to builder’s neglect. Cash was paid out and lost to a disreputable builder. This could have been easily resolved by having a Title Company and bank manage the money.   This procedure is now highly recommended by John.

Find out more about how proper planning saves you time, money and headaches with our exclusive Needs and Options Review.