For Andrew and Kathy Dorich, preserving their home’s history is a passion. They have been enjoying their charming 1925 Cotswold house in Joliet, Illinois for over 30 years. Cotswold is also known as “Storybook style” or “Tudor cottage.” Our recent second story addition restored an already wonderful family home to its original glory and then some.

Andrew and Kathy came to me because they realized an architect was the best way to achieve the seamless antique feel they desired. After a friend’s referral and our plans drawn up, they felt most comfortable working with Stanton Architects, Inc. They knew that hiring a design/build firm would carry the original design through construction.

The project called for a master suite built above the great room in the middle of the house; all other rooms were to remain intact. Along with three adopted children, Andrew and Kathy committed to taking care of her elderly father in this new five bedroom, three and a half bath home. Two bedrooms remained on the main floor with three bedrooms upstairs.

One way of preserving the Cotswold “flavor” was working around the main winder staircase. Making a winder stair stop, or landing, is against code today. These stairs were grandfathered, however, so we could keep them as long as they were not modified. So, we created a landing and four more risers to the master suite. 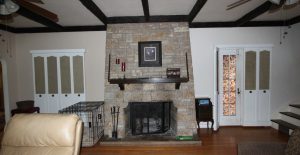 “John did an excellent job assuring the exterior chimney was nicely incorporated into the new design.” – Kathy Dorich

The heart of the home is the great room. We used a textured plaster on the 12’ ceiling to carefully preserve its ornate beams. A focal point of the great room is the impressive 8’ wide brick floor to ceiling fireplace adorned with French doors on each side. It was important to the family that we maintain the original design of the chimney and fireplace.

The final touch was replacing a prior remodel of Colonial doors with custom Miracle doors to match the original. The Paine Lumber Company in Oshkosh, Wisconsin manufactured miracle doors in the early 1900s. They can be found in middle and upper-middle class homes built between 1910-1945. Miracle doors were an innovative single flat panel with stepped layered moldings. Traditional five or six panel doors were common of that era. 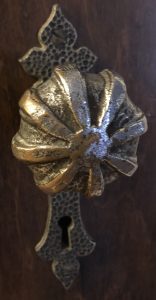 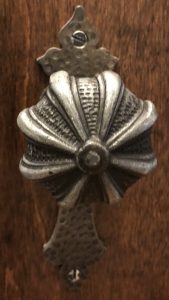 The couple helped by searching for doorknobs and backplates. A months long online search for doorknobs found a perfect match in a California antique store. Custom backplates were ordered from an ironworker in Pennsylvania. I appreciated their active partnership.

The exterior design, as the interior, stayed true to the home’s 1920s history. Exterior Finish Insulation System, EFIS, instead of the more standard Portland cement, matched the color and texture of the original stucco. As a result, the house reflects the roots of this heavily wooded, historic neighborhood known as Cherry Hill.

Ask older folks who live there, and they’ll tell you, “It was the most high-end place to live in the area.” Now, it’s a mix of fixer uppers, modern-day homes that try to fit in, and traditional gingerbread homes. Andrew and Kathy emphasized throughout the process that they wanted to preserve the home and community history.

After six months of design and construction, we completed the 582 square foot addition and full restoration. Roofing, stucco, windows, framing and moldings all came together in what I love to call the “Cotswold Jewel of Joliet,” a stunning example of a Storybook home’s original glory revealed! Every nook and cranny of this home is being used. It was a special project for me. I could make a precious jewel out of it, an ornament for this special neighborhood.

« Save the Bathroom » EIFS or Stucco: Same But Different
Log in here!