DESIGN DILEMMA:  WHAT IDEAS CAN YOU GIVE US TO EXPAND AND UPDATE OUR TRADITIONAL SPLIT-LEVEL HOME?

The owners of this classic 1960’s split level home wanted a larger house.  They also wanted to keep this home in the family because it was built by their father.  With so many wonderful memories, they hoped to pass it on to their children.  Their renovation wish list included a fourth bedroom, another bath, and a larger garage to accommodate his work truck, electrical supplies, and tools.

During the 1960’s housing boom, the split-level home became popular because it was less expensive to build.  Eliminating the costly deep full basement gave buyers just enough shelter from possible tornadoes.  Split-level homes are more challenging to expand and people like the rich look of large gables and dormers.  Expanding became a roadblock to some but talented architects have found creative solutions.

The lot could accommodate a garage expansion but not an extra bedroom and bath.  Building on top of the expanded garage was ideal but the challenge was access to all rooms without losing a bedroom.

The answer was to relocate a bedroom adjacent to the new bath and bedroom.  This allowed a hall with a half flight of steps to the addition.  A small study nook lined with bookshelves was a bonus!

WOW!  The owners received a prestigious “MOST BEAUTIFICATION AWARD” from their hometown. 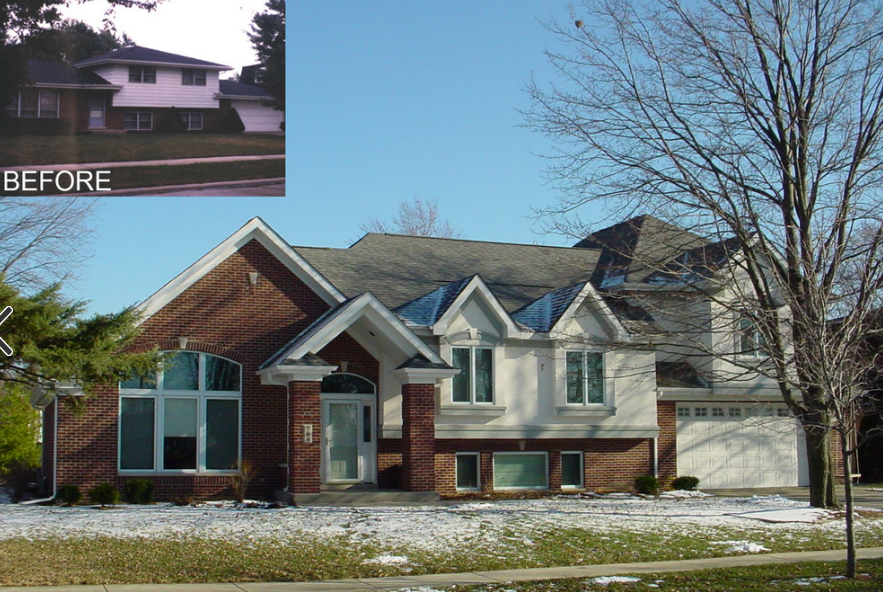