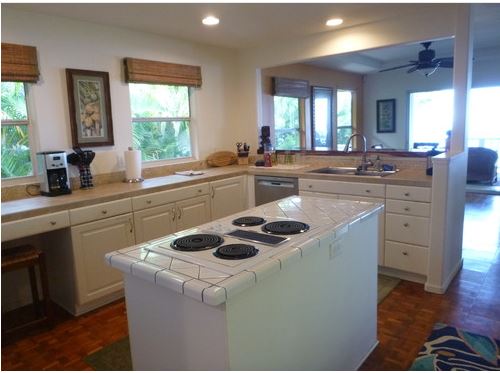 DESIGN DILEMMA:  HELP!  WE NEED A BETTER LAYOUT BECAUSE WE BOTH LIKE TO COOK AT THE SAME TIME.

In this vacation rental, we basically like the layout, but the usable space on the island needs to be bigger because we use that all the time.  We often both cook at the same time, from opposite ends of the island.  I’d like to use a 42” wide granite slab on the island.  Do 36” aisles seem like enough, given the flow around the island both ways?
We can move the cooktop to the window wall, but it’s not perfect there either, because the 36” windows seem a little too close together.  I don’t want the expense of moving them, and we wouldn’t be able to cook together.  So… which is it? Cooktop on the island, or cooktop between the windows? 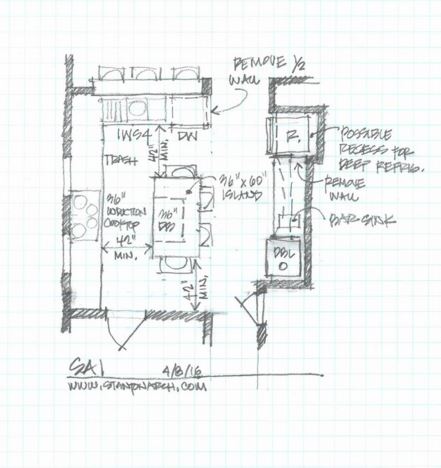 Without too much deconstruction, I favor an induction cooktop between the windows.  Flip flop the dishwasher and get rid of that termination half-wall facing the refrigerator so that you don’t hop food over it.  I’d put in the Galley Workstation 4 starting from the new dishwasher.  A 42” wide island is impressive if possible without impeding the aisles. Alternately, a 36”x60” slab with a 12” overhang at three sides on a 36” base with side pullout drawers will comfortably permit four barstools with arms to view the cooktop, windows and workstation.  With this design, there should be a minimum 42” wide aisle around the island. Remove the wall flanking the refrigerator because it’s too boxy, then place a cabinet above.  Accentuate the two trimmed out appliances with a soft arch and entertain in that area with a bar sink, including libations/soft drinks.